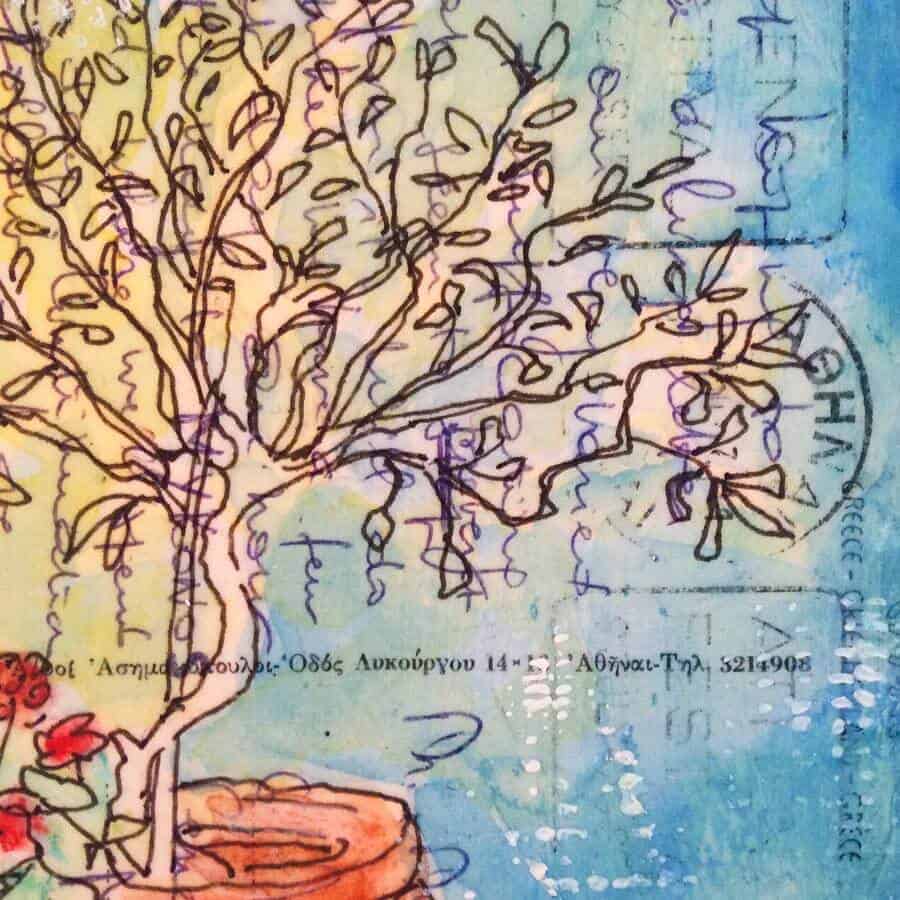 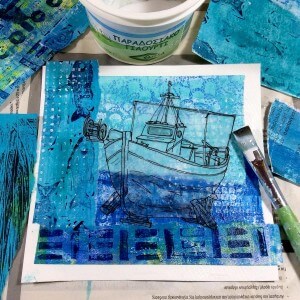 For the final few paintings in the ‘100 Artworks Inspired by Greece’ series I reverted back to my great love – the drawn line. This time I explored a method of image transfer printing which had previously produced rather unpredictable results. Transfer print is a really great way of re-purposing existing drawings and paintings which allows the image – which is semi-transparent – to be layered with other papers, text and paint. 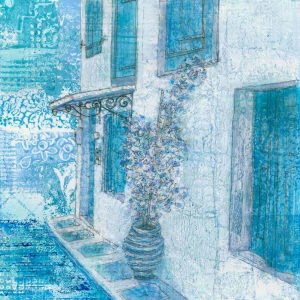 There are many different ways of creating an image transfer – several of which involve rather nasty, smelly chemicals. Other methods are just plain unreliable and as the process tends to take quite a bit of time, this can be rather frustrating if an image disintegrates near the end of the process. Then you just have to start again at the beginning. I’m fairly happy with the method used in this series of paintings though, and didn’t have any major disasters! 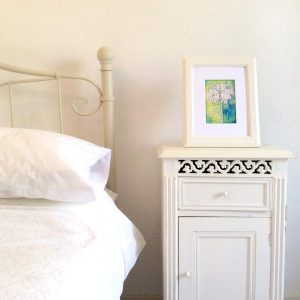 The drawings used in my mixed-media work mostly come from my sketchbooks, which act almost as a second camera – capturing irresistible scenes and little snippets of daily life in Greece. Using a special transfer print medium and a good quality, adjusted laser copy of the original drawing, the image can be lifted clear of the paper on a semi-transparent gel-skin. It’s a bit of a fiddly process, involving soaking the paper and very carefully rubbing all the paper fibres away from the ink. If you’re too quick or too rough at this stage the image ends up in shreds and you have to start again! It’s definitely one of those techniques which improves with practice as there are many variables. 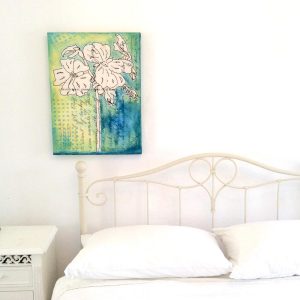 Transfer printing is also a rather addictive process. Having grappled with it in the final stages of the 100 square artworks, I returned to it for some of my next series – ‘100 Postcards from Greece’. At the start of this series I simply re-drew the imagery – either from reference to the original sketch, or using a combination of the sketch and photos. As the 100 Postcards from Greece series progressed, I started to introduce transfer print elements. What I particularly love about using a transfer print drawing is that it allows you to retain the feel of the original drawing with all its quirks and hesitations. It allows for a direct ‘print’ of the original drawn line but still allows for infinite variation in the background, painting and collaging of the new original. It’s almost magical and lends itself very well to this altered-postcard-art. See them in the flesh at my August Exhibition in Koroni.