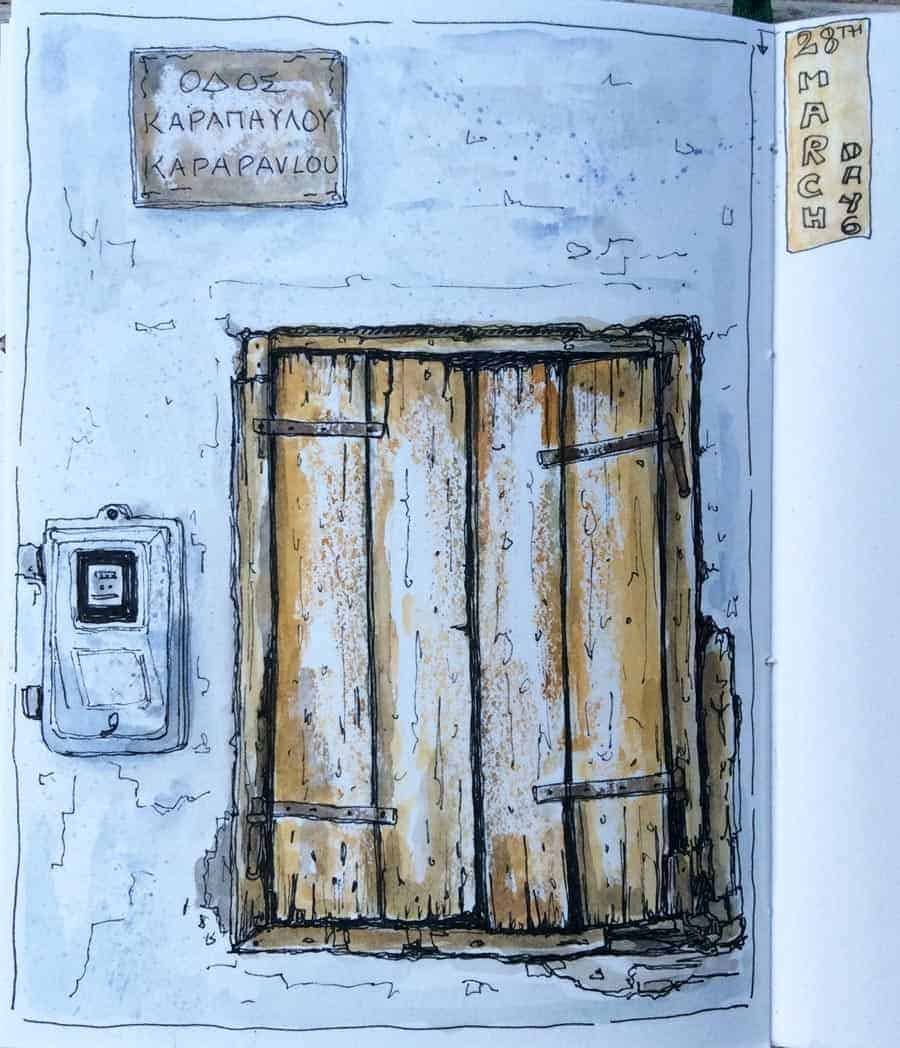 When Greece introduced the second wave of shutdown restrictions on 23rd March, I decided to begin a new series of daily drawings. It had been a while since my last collection of dailies and this time I joined a few local artist friends who were about to do the same thing. Rather than begin a brand new sketchbook, I started the series in a nice little sketchbook I had already started, which was a gift from a student.The first few sketches are scenes from our walled garden in Harakopio. Despite drawing occasionally, I felt a bit rusty at the start of this series… 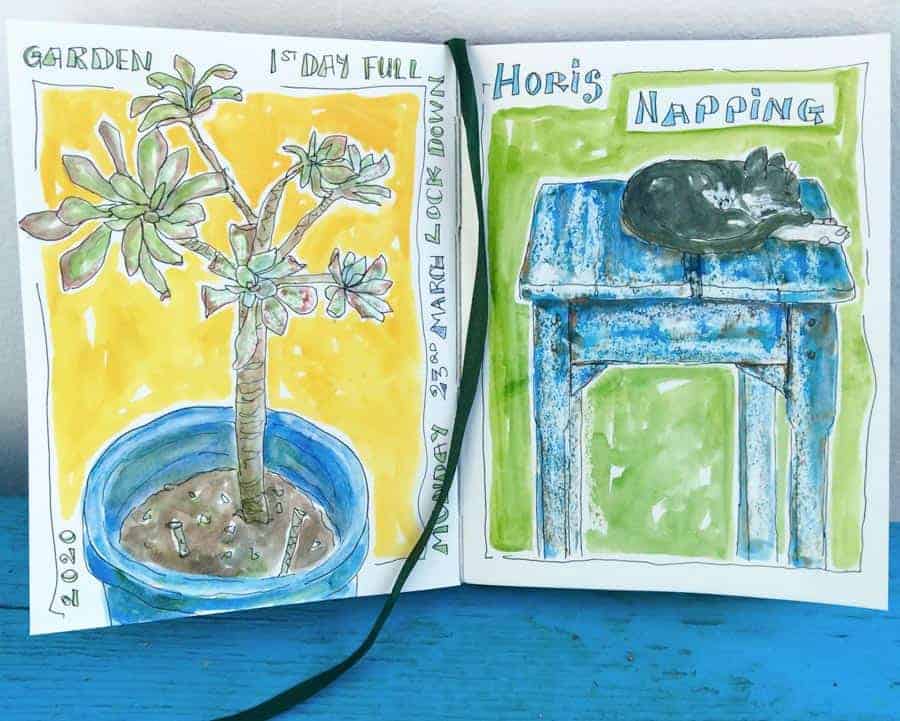 Day two is a sketch of our rather badly pruned lemon tree with assorted pots. This tree produces those giant lemons with really thick pith which the locals love to boil up with sugar and make into a really sweet glyko. This tree also has a mandarin graft, which has taken years to come into its own but is now producing quite a few mandarins and threatens to crowd the lemons out. The two broken pots were found out the back of the studio, left over from the days when there was an active pottery in the olive grove behind the studio. The lovely pot in the foreground was a gift from a friend. 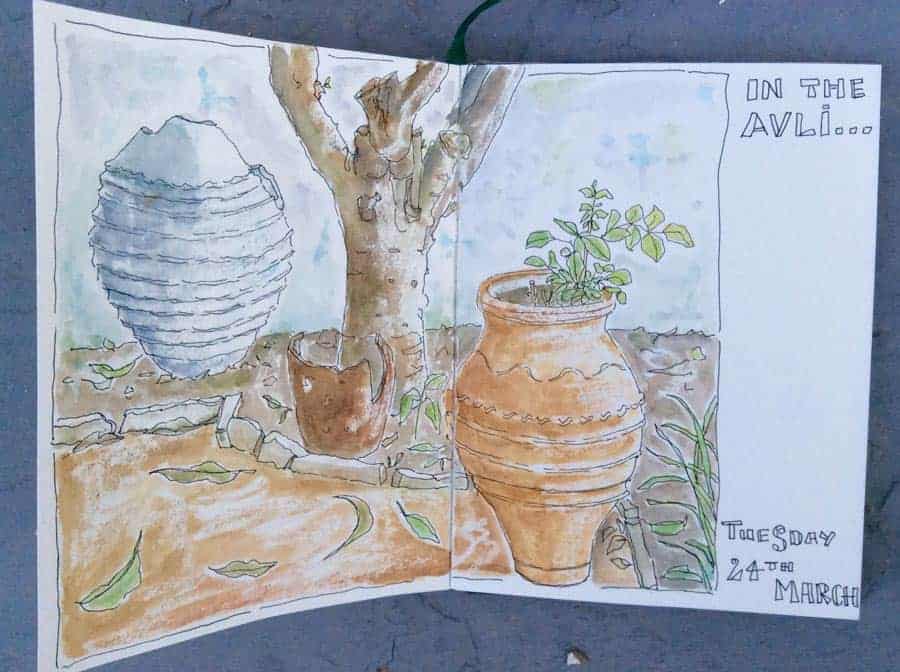 The third drawing happened inside our house on a bit of a sad and grey Greek Independence Day. We should have been marching and dancing in Koroni on this day and were to have hired splendid traditional costumes for the occasion. Instead, I took a short walk around the deserted streets of Harakopio, watching the odd Greek flag flutter in the strong wind and light rain. 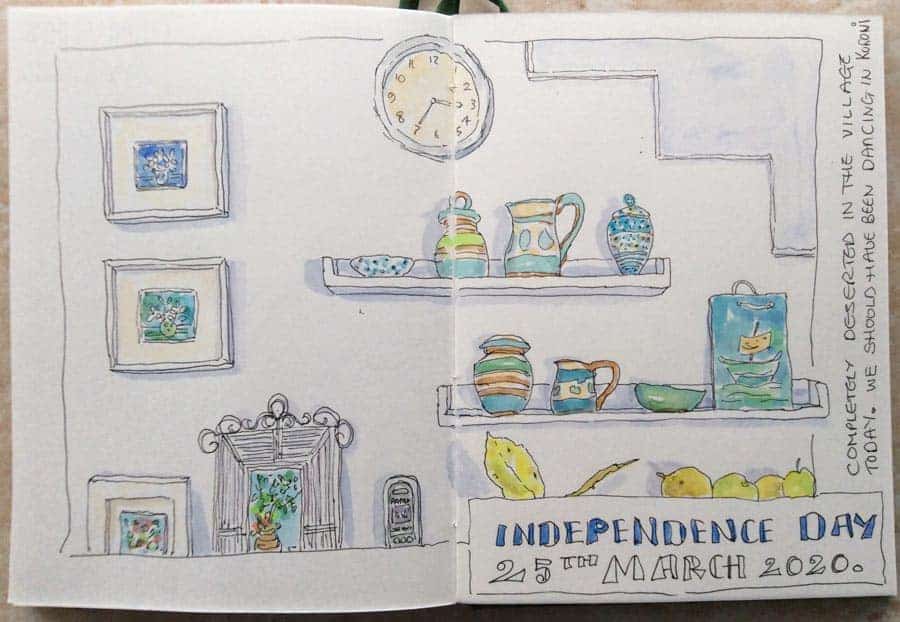 Day four was drawn from a photograph I had previously snapped of a beautiful old door in an alleyway in Koroni. The door in question is opposite our accountant’s office, although these days it has deteriorated a little more than when I took the photograph. I do love these massive old doors though, regardless of the state they are in! 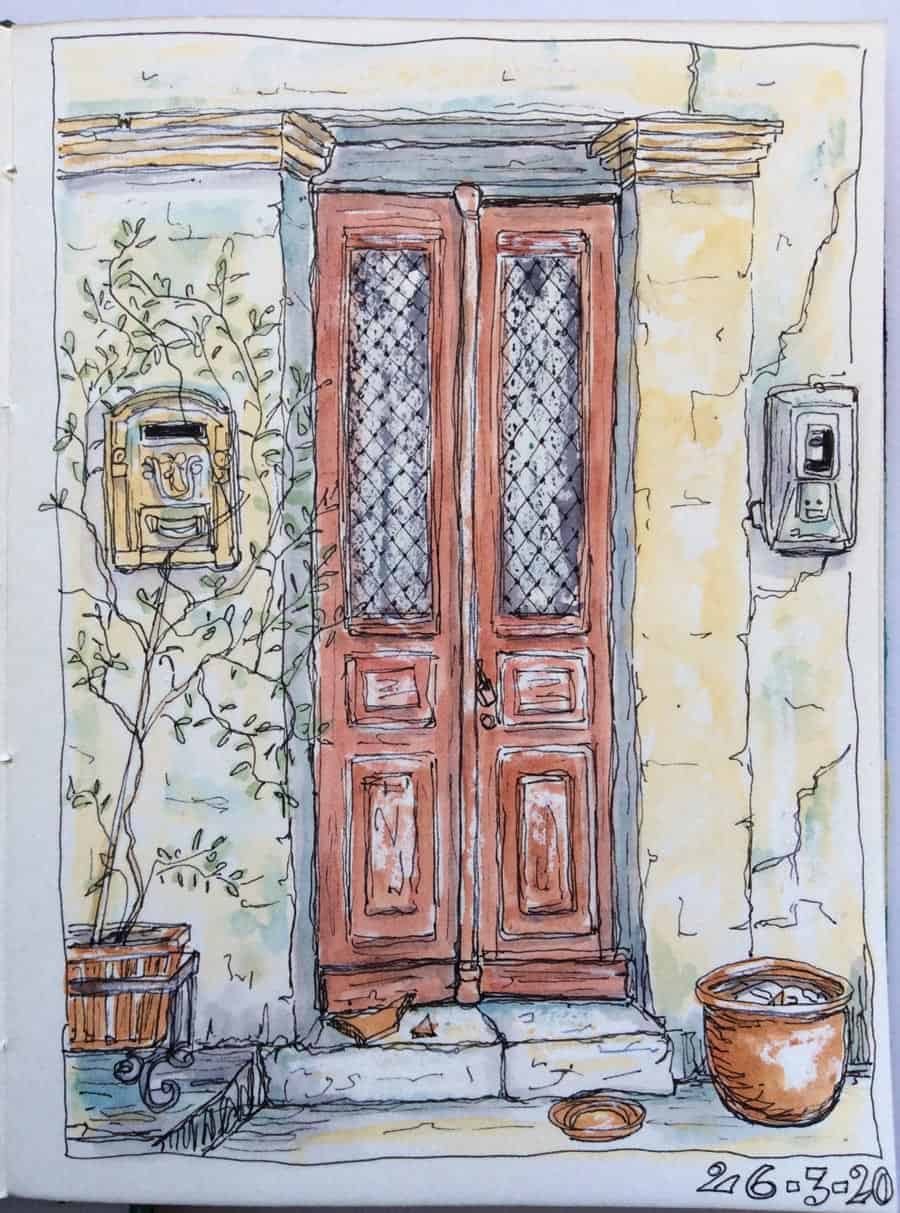 On day five I drew a strand of a new baby vine which was tentatively reaching over the back wall of our garden, trying to grab onto our orange tree. These vines grow so incredibly quickly at this time of the year – you can almost see them growing as you look at them. I love their bright, acidic colour, almost transparent leaves and curly, feathery tendrils. Unfortunately this one needs to be discouraged from climbing completely into our garden and smothering the tree. 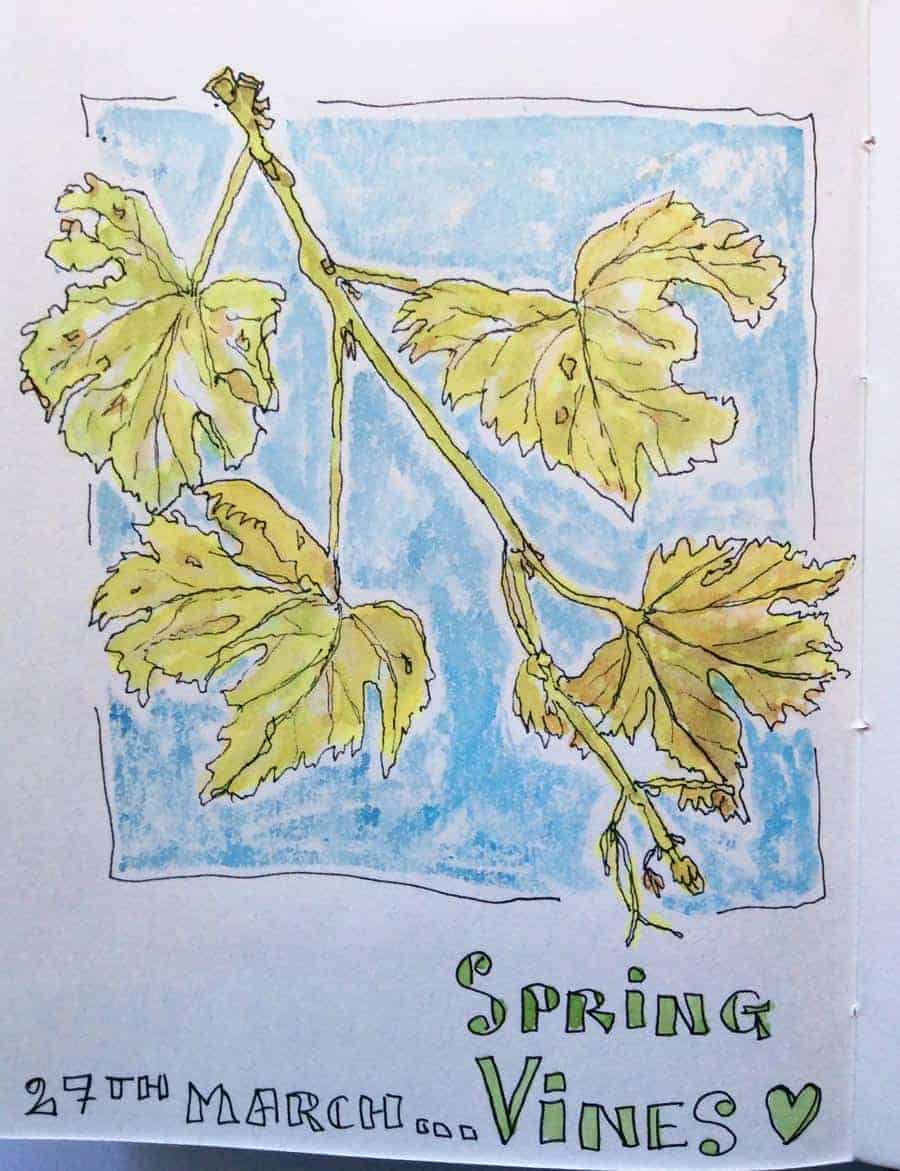 Day six is a drawing of some of my favourite subject matter – old wooden shutters and an electricity meter. On this occasion the drawing was made from one of my many photos taken in Koroni, as of course, we are not allowed out and about for sketching! These shutters were once upon a time painted with that splendid yellow ochre paint, which usually seems to come in high gloss. They have faded and peeled gracefully over the years.

Day seven was drawn in our walled garden, or ‘avli’. This old feta tin has definitely seen better days – it’s getting quite rusty around the bottom but will probably stand one more year of turquoise paint. Currently filled to overflowing with yellow ‘weeds’, I will likely put a new red geranium in it sometime soon. It seems odd that the garden shops are still allowed to open here… I guess it is because they also sell animal feed, but the floral side of it hardly seems like ‘essential’ shopping. I will wait a while until I venture out to buy my spring plants I think… 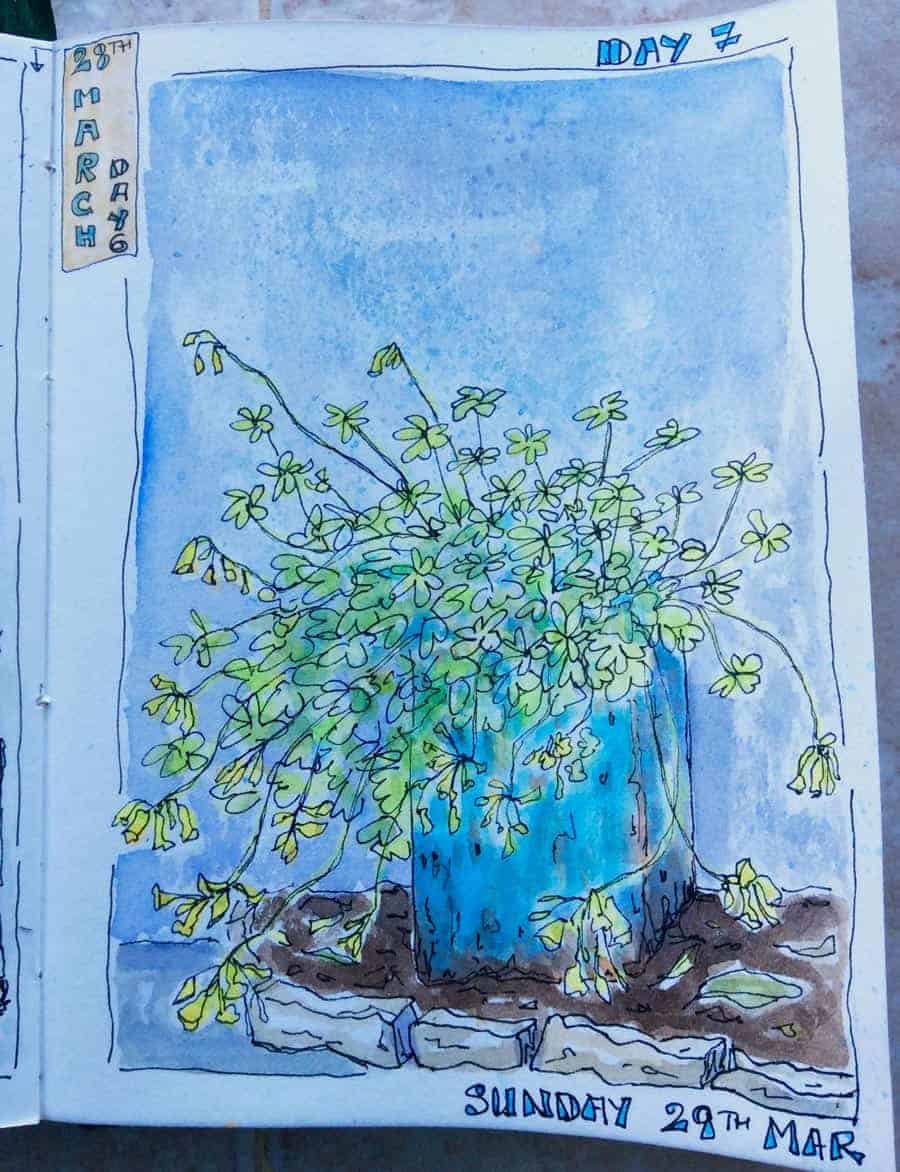